AT TEN O’CLOCK last night we walked down to the beach, leaving behind the embers of a small fire in the woodstove and a single lamp turned low. The beach was beautiful and still, except for the steady, rhythmic breaking of the waves. A solitary yellow light advanced slowly right to left, east to west, on the dark horizon.

The evening was cool, but we could have walked the beach for hours. We were not dressed for it, though, and in any case could not stray far from the dying fire.

Hundreds of fatal shipwrecks haunt these shores. In The Outermost House, published in 1928, Henry Beston wrote admiringly of the Coast Guard surfmen who patrolled the beach around the clock, year-round, looking for boats foundering in the sandbars off this wild stretch of ocean off the outer beach.

The nightly beach patrols began with the formation of the United States Life-Saving Service on Cape Cod in the 1870s, and continued until 1940, when a safer route for boat traffic was secured with completion of the Cape Cod Canal. Some of these night-walkers are credited with building some of the early shacks, around the time of Beston’s book, as havens from bad weather or places to meet their sweethearts.

The first shacks, though, appeared on Cape Cod’s outer beaches more than a century earlier, as part of relief efforts by the Massachusetts Humane Society, to shelter any shipwrecked sailors who made it alive to shore.

Now it feels supremely safe in these dunes, like being inside a giant sandbox.

Night, what Beston calls “the true other half of the day’s tremendous wheel,” is a rich and complex part of our planetary experience from which many people retreat. We expend copious time and energy trying to defeat it, overwhelming the dark with synthetic light before falling to sleep, with perhaps a lingering look at the full moon, moved by its natural illumination, or a starry night sky.

We rarely give our senses time to adjust to and explore the night, with its unique shades, tones, and odors. But here in the dunes, we are stripped of artificial light except for a few dots of flame from a kerosene lamp and the distant floodlight from a ship sliding silently across our horizon. There are no human predators, and it would be a rare storm to threaten us on shore.

Our latent senses are activated in this environment, fear of the unknown confronted. All but the fear blossom. 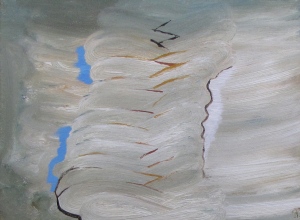 WE BEGIN a twilight walk to Peg’s shack for a visit with friends, taking the winding, inland route through the dunes. I have made the ten-minute walk many times, but this is my first time here in four years, and the dunes often shift from season to season. We make several false starts to Peg’s off the main road as I struggle to get my bearings.

Finally, by process of elimination, we approach a shack sitting well above the dunes, though it makes little sense to me. I know Peg’s to be practically buried in the sand — not visible from either the beach or the interior road on which we walk. This shack jutting above the dunes does not fit, but its roofline and porch are familiar, and we have run out of choices.

When we near the shack, rust-colored light seeps from its windows and there is a low murmur of voices inside. But the entryway is level — not the descent down several stairs I remember. Our friends supply the answer to this riddle: since my last visit the shack has been lifted up seven feet, placing it (for now) safely above the encroaching dunes.

After conversation over a couple of glasses of musty red wine from a vineyard in nearby Truro, we start for home, around nine. A heavy fog has rolled in, and it is quite dark. Rather than return the way we came, we decide to walk the beach.

The fog is too thick to reveal stars, or even the presence of other shacks that might serve as landmarks. We carry flashlights, but still I am unable to make out the cut to the beach where the path from town ends. As we walk and walk, the dunes become more strange and unfamiliar.

At one point I leave the beach and scramble to the top of a large dune, but see nothing recognizable from its vantage point — not a single shack. After a brief debate, we continue walking in the same direction.

Before long, near the base of a shadowy dune, we see a large black mass emerge from the darkness. Bigger than a bear, smaller than a whale, it gradually forms into the hard edges of a pick-up truck as we approach. It is empty, as far as we can tell, though we do not choose to investigate. As no vehicles are allowed on the beach during the nesting season of the plovers and terns, we now know we have come too far, and turn back.

We walk briskly, enough for me to work up a light sweat beneath my windbreaker. After about ten minutes we find the outer edge of the area roped off for the birds. I shine my light on the single strand of twine looped between each post, and we follow it for another ten minutes.

Eventually we come to a break in the line, signaling the now-recognizable path to Euphoria, which winds through a field of dune grass after it leaves the beach, and over a little rise before joining the driveway. You cannot actually see the shack until you are at the top of this rise.

With our unintended detour, the walk home from Peg’s took well over an hour. It was pleasant, a puzzle of sorts. We appreciated it mostly in silence, listening to the breaking surf, breathing the mists and smelling the warm salt air, enjoying the feel of our legs pushing through the sand, making out what little we could see.

You cannot really get lost in this space, but the dunes can be disorienting at times, seeming to take on a life of their own.